Aftermath of the suicide bombing at the Shia mosque
Looks like those pesky CIA/MOSSAD agents SCARY Islamic terrorists are at it again! On October 8th, a an ISIS-K suicide bomber set off a suicide vest in the Gozar-e-Sayed Abad Mosque of Afghanistan. Killing 50+ and wounding 143 people.
It's rather funny that a completely "new" Islamic terrorist organization popped up in Afghanistan immediately as the Taliban gained complete control and the US ran away with their tail between their legs, ain't it? The US government finally leaves after decades of pouring money down the drain in a war that we honestly never had a chance at winning because the vast majority of the Afghan public DIDN'T even want regime change!

But now ISIS-K is here to break up the new Taliban government conveniently as soon as we leave and cause massive amounts of chaos against them with seemingly no reason or motivation whatsoever! How can people not see that this is pure Zionist bullshit? Wake up!

Furthermore;
Who has never been directly attacked by ISIS?
Who has openly admitted to funding 'moderate Syrian rebel' groups, when is no such thing as a 'moderate' terrorist?

You know who it is already; IsraHell and the Masonic States of America!

The Jewishness of Bilderberg

Bilderberg, one of the many breeding grounds for the Jew World Order - always has been and always will be - But Gentiles have always attended Bilderberg as having a non-Jewish face is convenient for the Jews, always. So let's take a look at the Bilderberg meeting of 1954 and advance forward; shall we? This is not all of the Bilderberg meetings, just the first in 1954 and the ones from 2010 to 2019, keep this in mind; there are far more Jews and attendees than we know about.

And before you accuse me of cherry picking; this list is made solely for the purpose of showing Jewish influence over the Bilderberg meetings. Nothing more, nothing less. Full lists of all members both Jew and Gentile however are provided so don't say I didn't provide them. Also the text size is smaller here because blogspot glitches out and corrupts the font type when I set it to medium.

On October 12th, 1934 the Jewish Telegraphic Agency published, 'Christopher Columbus a Jew? New Evidence Supports Theory' - taking credit for the actions of the the adventurer Christopher Columbus back when he was celebrated as a good figure and not an evil person. Now though if you mention this Jews will label it 'antisemitic' even though they themselves proclaimed it! Let's take a look at the article:

"And the parents, named Domingo de Colon and Suzana de Fonterosa, were Maranos, Jews who were forced to embrace Christianity to save their lives in that day of the Inquisition terror. And now Christopher Columbus, or Christoforo Columbo as the Italians think of him, emerges in his true light, a Spanish Jew. But how, the skeptical reader will ask, does it happen that history has recorded him as an Italian, born in Genoa of weaver parents if actually he was a Spaniard born in Pontavedro of map-making parents, and a Jew to boot?" (Source)

So let's take a look at the actions that the marrano Jew Christopher Columbus committed!

How Columbus Created Slave Trade That Changed World's Economy
"Even before Christopher Columbus arrived in the New World, slavery was already in existence. But it was Columbus who turned it into a worldwide enterprise and made it the basis for the New World's economic system.

Before 1492 it was not uncommon for Indians to enslave tribes they defeated in battle, although most of the tribes lived in peace.

The beginnings of slavery under the Spanish are murky. Columbus laid the groundwork for slavery during his first voyage, in 1492. When he found how docile the natives were, the explorer began to see them as potential servants.

He wrote in his log, "They ought to be good servants of good intelligence." (Source)

Columbus enslaves the Arawak and commits genocide
"Columbus and his men round up Arawak men, women, and children and enclose 550 of them in pens and four caravels bound for the slave market of southern Spain during his second voyage to the New World. Approximately 200 perish during the passage, and their bodies are cast into the sea. After the survivors are sold as slaves in Spain, Columbus later writes: 'Let us in the name of the Holy Trinity go on sending all the slaves that can be sold'" (Source)

Columbus was a mass killer and the father of the slave trade
"A young, Catholic priest named Bartolomé de las Casas transcribed Columbus’ journals and later wrote about the violence he had witnessed. The fact that such crimes could potentially go unnoticed by future generations was deeply troubling to him. He expanded upon the extent of Columbus’s reign of terror within his multi-volume book entitled the "History of the Indies":

'There were 60,000 people living on this island, including the Indians; so that from 1494 to 1508, over 3,000,000 people had perished from war, slavery, and the mines. Who in future generations will believe this? I myself writing it as a knowledgeable eyewitness can hardly believe it.'" (Source)

Thief, Slave Trader, Murderer: Christopher Columbus and Caribbean Population Decline
"That Columbus, or Cristóbal Colón (to give him his proper spanish name), was a slave trader is a matter of historical fact. He cut his nautical teeth sailing under a portugese flag engaged in the african slave trade a dozen years before 1492. When easy wealth in the form of gold proved not readily available in the Caribbean, Colón resumed his slave-trading occupation by loading the holds of his ships with Indian human cargo headed for the slave market in Seville. That he was a thief is equally self-evident, however a high-level thief he may have been. The law of tribute that he instituted in the island he called Española sometime in 1495 forced Indian people on the island to surrender goods, including gold ore, can only be classed as armed robbery." (Source)

Funny how Jews kvetch day and night about how EVIL Gentiles are, and how they all need to repent for their sins against Jews but conveniently forget their own villains whenever the topic is brought up, the evils of Gentiles are representative of ALL Gentiles but the actions of Jews are not? Jewish hypocrisy at it's finest! Never forget the Jewish roots of Christopher Columbus! 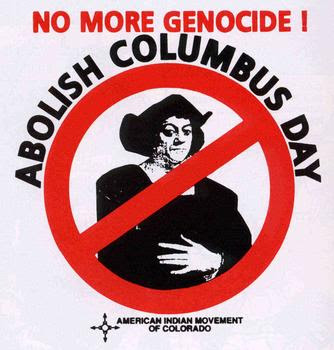 Uh oh, looks like the chosen were exposed yet again! Early this month articles ran about a movie being made around the plot by Jewish militias to poison the water supply of Germany and kill six million Germans in a revenge plot for the Holocaust - ironically enough fulfilling the age old 'antisemitic canard' of well poisoning that circulated during the era of the bubonic plague. Oops!

In 2015 the now former prime minister of Israel Benjamin Netanyahu proudly proclaimed that Hitler had no intentions to kill Jews UNTIL he was given the idea by a Palestinian cleric in Jerusalem (Source) - I cannot say I'm surprised by this information, since when have Jews not blamed whoever in earshot for the Shoah? Whoever they can force an eternal guilt complex onto and use to extort money from like the subversive parasites they are you can be absolutely sure the Holocaust museums or the Wiesenthal center will fabricate find some brand new evidence stating that [insert country here] provided funding to the Nazis, or gave shelter to Nazi war-criminals, or assisted them in war or whatever they can say to screech, holler, cry and demand their reparations.

Or they just promote mass guilt of gentiles by inciting that all Gentile populations are inherently antisemitic, responsible for the Holocaust or guilty of alleged crimes - this tactic is typically used by Jews to get Gentiles to shut up and stop talking about something that displeases them, whether or not the topic is true is irrelevant to a Jew; if it offends them it must be censored, destroyed, silenced and considered incitement to genocide to even mention.

Jews will screech, cry and holler about their Holocaust reparations and demand them from every single country in existence while cramming the Holocaust story down the throats of entire generations while refusing to speak on other genocides that happen because it would distract from their Holocaust racket that's raking them in billions of dollars from countries across the globe.

Never heard of it! Not important, by the way did you know that 6 million Jews died in the Holocaust? Never forget! - This is the mindset of Jews and Zionists, the only genocidal massacre that needs to be preached endlessly and remembered is the Holocaust, all other genocides are irrelevant and unimportant to Jews. Even to the point where they will gladly deny them ever happening (Jews deny Armenian genocide, Jews deny Bosnian genocide, Jews deny Holodomor) all to protect their Holocaust racket. Truly the acts of a divine people that cares about human suffering so much they selectively choose what periods of human suffering are important and which ones aren't.

Debunking the lie that Zionists are a minority of all Jews

One thing that a lot of Jews want to push nowadays is that TRUE Jews were never in support of Zionism or the existence of the land of Israel but that is a lie so easily debunkable it's laughable to even hear a Jew utter those words or watch fringe Ultra-Orthodox Jews march with pro-Palestinian protesters against Israel, but we all know that Jewish trick already; whenever you're confronted with overwhelming evidence of your crimes, just deny it! It can be seen everywhere!

But just look at how bad those Whites/Arabs/Asians are! They're far worse than us! It's the same song and dance that they've repeated for thousands and thousands of years now and it always seems to convince the goyim. But I digress.

According to a 2013 survey by the Pew Research center:
"About seven-in-ten American Jews (69%) say they are emotionally very attached (30%) or somewhat attached (39%) to Israel. These findings closely resemble results from the last National Jewish Population Survey, conducted in 2000-2001. In that survey, roughly seven-in-ten Jews said they felt very (32%) or somewhat (37%) emotionally attached to Israel." (Source)

Ontop of that it states heavily that Jews of all denominations including non-religious Jews are overwhelmingly in support of Israel, but let's look at other countries, shall we? According to a 2019 research study done by the American Jewish Committee; French, Israeli and American Jews have incredibly similar views, with most Jews agreeing that Judaism was more rooted in ethnicity than religion (Source) According to a 2010 survey on British Jews it states that Jews in the UK are overwhelming supporting of Israel and it's ethnic cleansing and genocide self defense operations that just so happen to involve bullying Arab children, killing their parents and putting blacks into internment camps (Source)

Remember this whenever you hear someone say that not all Jews are Zionists or that the actions of Israel don't represent the actions of all Jews, because Jews on the other hand disagree.